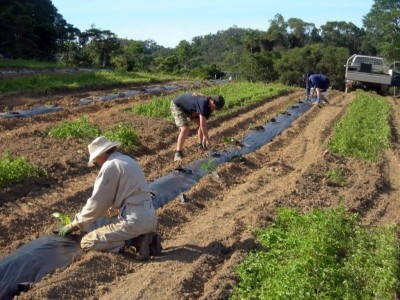 The company behind Australia’s first single origin chocolate says the country’s cocoa is rich in polyphenols and is set for a big future. Its executive chairman, Cadbury veteran Barry Kitchen talks to ConfectioneryNews.

US confectionery firm Cadbury Adams yesterday pledged to stop
advertising Bubblicious Gum to children under 12, the last product
in its portfolio to come under a nationwide initiative.

This week, demand for polyols is reported as experiencing
substantial growth on the back of health trend, Cargill provides
more convenient cocoa packaging, and Cadbury Schweppes moves nearer
to its beverage-arm demerger.

The Australian arm of Cadbury Schweppes, has lost another round in
its bid to protect the use of its characteristic colour purple,
used in wrapping for many of the company's confectionery products
and for advertising purposes.

Cadbury has this week confirmed it will continue with
plans to switch some UK production to Poland, sparking accusations
that the confectioner will be adding 12 million food miles to its
brands.

Cadbury's de-merger of its US beverage business should increase
margins for the confectionery business by 4.6 percentage points,
despite an initial cost of £1bn, estimates Credit Suisse.

Cadbury Schweppes yesterday filed regulatory documents outlining
the demerger of its Americas beverage business into a new
company, revealing the company's strategy to maintain its position
as the world's largest confectionery...

International firms such as Cadbury are the most successful
confectionery companies in Western Europe, according to
Euromonitor, suggesting that a global outlook is necessary to
survive in an increasingly competitive market.

The Cadbury Schweppes drive to boost margins is full steam
ahead, boosted by the demerger of an underperforming drinks
arm, as the company today announced confectionery
revenues grew by ten per cent over the third quarter.

Cadbury highlighted for its green fingers

The Climate Disclosure Project yesterday highlighted Cadbury
Schweppes as the best in its class for the actions it has taken
against climate change.

Cadbury Schweppes today reported an operating profit decline
of 6 per cent to £180m in the first-half of the year,
particularly due to high input costs and restructuring costs.

Cadbury Adams USA has extended its partnership with ingredients
firm Senomyx in a bid to boost its gum business, the company
announced this week.

Cadbury is being forced to source alternative supplies after floods
suspended production at its Sheffield factory, the
company announced today.

Cadbury has launched its Bubbaloo bubble gum in India, as part of
its continuing bid to take advantage of developing markets.

Cadbury yesterday is to plead guilty to six
additional salmonella charges over an outbreak in the Herefordshire
factory last year.

Following talks in London today, Cadbury Schweppes has officially
announced its new confectionery strategies, to be implemented
following the separation of its drink division, Americas Beverages.

Cadbury pleaded guilty today in a UK court to three breaches of the
country's food and hygiene regulations, admitting it was
responsible for allowing salmonella-contaminated chocolate to be
sold on the market last year.

Cadbury gets sweet on Romania

Cadbury Schweppes today announced the sale of businesses in
Australia, Canada and Italy, raising over £45m (€66.4m) towards its
2007 disposal target.

Confectionery giant Cadbury Schweppes is set to refocus its UK
operations and increase marketing spend over the coming year in a
bid to overcome negative publicity and the split between the
business' beverages and confectionery...

Cadbury and some of its managers face prosecution for allegedly
ignoring a case of salmonella contamination at one of the company's
UK plants.

Cadbury Schweppes has said it will separate its confectionery and
US soft drinks businesses, sending ripples of speculation across
the financial sector about the firm's motives.

Investor takes a bite out of Cadbury

Speculation is growing over a potential takeover of confectionery
giant Cadbury following the announcement that US investor Nelson
Peltz has acquired almost 3 per cent of the company.

Even after a year marred by salmonella contamination, product
recalls and financial irregularities, Cadbury Schweppes has posted
9 per cent growth in full year profits as the company's portfolio
feels the benefit of strongly-performing...

UK-based Cadbury Schweppes is set to be prosecuted under
environmental health laws after the company allegedly released
chocolate for sale that was contaminated with salmonella, according
to the Guardian newspaper.

Cadbury scraps 'natural' label on 7UP

Drinks giant Cadbury Schweppes is to change the labelling on its
flagship 7UP product, following a fierce debate on the validity of
new 'all natural' claims it placed on its labels just nine months
ago.

Weak performance in the UK combined with financial irregularities
in Nigerian operations has added up to an unsettled year for global
confectionery giant Cadbury Schweppes, according to a trading
update announced today.

Confectionery giant Cadbury Schweppes has been forced to lower
profit expectations after feeling the effects of poor performance
in the UK market.

An EU court ruling in favour of Cadbury opens the door for
multinationals to shop around the bloc for the lowest tax rates.

US based confectionery company Cadbury Schweppes has announced the
appointment of a new non-executive director.

The domination of the confectionery market by global heavy weights
such as Nestlé, Mars and Cadbury Schweppes is forcing small
companies to target highly specialised markets, according to a new
report.A number of high profile mergers...

Global confectionery maker Cadbury Schweppes has opened its first
R&D centre in south-east Asia, as it seeks to drive growth in
emerging markets like China, Malaysia, Thailand and Indonesia.

Cadbury at war over the colour purple

Global confectionery giant Cadbury Schweppes are appealing against
a court ruling that they do not have exclusive rights over the
colour purple.

Cadbury Schweppes was the most likely source of an outbreak of
Salmonella montevideo that poisoned 37 people from February to June
this year, according to the UK's health authorities.

Cadbury tries to clean up its act

Cadbury Schweppes has been forced to improve cleaning processes at
its Herefordshire factory after last month's recall of
Salmonella-contaminated products.

Cadbury Schweppes has come under renewed criticism following a
regulatory finding that it did not adhere to EU safety measures at
its Herefordshire plant, where salmonella was discovered earlier
this year.

Chocolate has a nice feeling to it - tasty, fun, luxurious and
slightly sinful. This is comfort food, accessible to all and
epitomised in the recent film, Charlie and the Chocolate Factory.

Cadbury under pressure from authorities

Cadbury Schweppes has come under fire from UK food watchdogs after
it failed to report finding traces of a rare strain of salmonella
in its products.

Chocolate and drinks group Cadbury Schweppes will spend A$24.5
million (€14.3m) on an expansion at its chocolate factory in
Tasmania, it announced last week, citing growing demand for its
chocolate bars in Australia

Cadbury to miss targets for 2006

Cadbury Schweppes says that it is unlikely to be able to deliver
margin growth within the company's goal ranges for 2006, though US
gum sales have been strong.

Leading confectioner and drinks company Cadbury Schweppes has
announced plans to sell its UK-based popcorn and toffee divisions,
as the company sets about tweaking its extensive global portfolio.