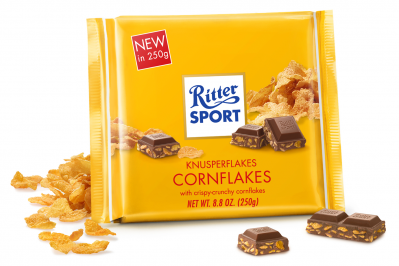 Grains such as quinoa, and cereals including corn flakes and rice puffs, are attracting attention globally as an ingredient or flavor in chocolate confectionery but not so much in Germany. 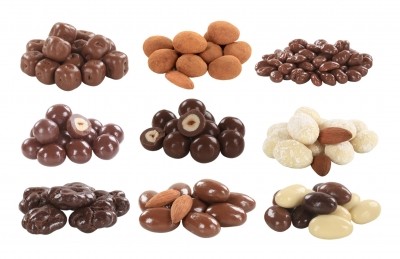 The UK-based specialty ingredients developer, Thew Arnott, is now offering a vegan alternative to shellac in its range of AraTAs coatings for confectionery products. Shellac is a resin secreted by the female lac beetle, and is often used a food glaze.

Wheat and cocoa deliver for ADM but overall profit down 15%

Archer Daniels Midland’s (ADM) unit that processes wheat and cocoa saw a 62 per cent hike in profit but the agri-commodities giant’s overall earnings for its fourth quarter dropped 15 per cent.

An investigation by Danish authorities into illegal GMOs in food products found all but one batch of tortilla chips followed content and labelling riles.

Will we all be waking up bleary-eyed to bowls of tattooed Corn Flakes any time soon? Probably not, but by suggesting that we could, Kellogg’s has hit on a winning marketing ploy.

Global grain markets are facing breaking point because of drought and mass urbanisation in China which is diverting land-use away from crops, according to a new study from researchers at the University of Leeds.

Hydrocolloids can be added to tortilla formulations containing bean
flour to extend the product's shelf life and improve texture while
increasing its nutritional content, say researchers.

Japan's leading chocolate maker Meiji Seika has recalled a range of
confectionery products, after it was discovered that they contained
a novel sweetener made with an unapproved genetically modified
enzyme.

A new range of biodegradable meat pads can
reduced discoloration in packaged meat, the manufacturer
claims.

The first ever Australian field trials of genetically modified
wheat will take place in Victoria this year, as the government aims
to fight possible food shortages caused by drought.

News that a variety of GM corn produced signs of liver and kidney
toxicity in rats should be a wake-up call for better testing and
more transparency from biotechs, if GMOs are to be accepted by
increasingly sceptical consumers.

Limagrain plans to launch what it claims is the worlds first
instant waxy wheat flour at the HiE in Frankfurt this month.

A genetically modified wheat variety that has significantly more
resistant starch than regular wheat could reach the market in five
years, say Australian scientists who have won financial backing to
commercialise the crop.

National Starch Food Innovation has introduced a range of natural,
grain-based ingredients, which it claims maintain the positive
attributes of traditional flours while expanding and improving the
ways they can be used in packaged...

Monsanto has won permission to import and market three of its
genetically modified (GM) maize types across the EU for 10 years,
despite fierce opposition from some Member States.

Two thirds of Russians are against genetically modified foods and
the majority of experts support a ban on GM crops as the government
prepares new production laws, reports Chris Mercer.

European ministers once again throw out a Commission proposal to
allow a GM ingredient to flow into the food chain, writes
Lindsey Partos.

Ambitious US ingredients supplier Cargill boosts its war chest,
announcing a 35 per cent rise in profit for the third quarter of
2005, on gains from commodity trading and its animal feed and steel
businesses.

An improvement in the quality of flour ingredients is the focus of
new research by US government scientists who are taking a closer
look at hundreds of different proteins in the wheat kernels.

Prices for the popular hydrocolloid gum arabic used in a range of
food applications have doubled in 12 months as political turmoil
and poor stocks leave the market exposed, writes Lindsey
Partos.

Wheat and corn based ingredients open to price rise

Price increases for key raw materials used by the food industry
threaten over the next 12 months as low global stocks remain open
to unexpected disruptions.

A third source of GM ingredients could soon be cleared by Europe as
officials meet to discuss to clear approval for a corn designed by
biotech giant Monsanto.

Increased harvests for key food commodities could suggest a
near-term easing up of price pressures for ingredients companies
and food manufacturers but an overall draw-down in global stocks
means prices are still extremely vulnerable,...

French starch supplier Cerestar, a subsidiary of US agri-giant
Cargill, will tackle the stagnant European bakery market rolling
out a new generation of cold water swelling starches targeted at
bakery products with fruit, cream or...

The European Commission has given the nod to Sygenta's Bt11
genetically modified sweetcorn, granting authorisation for it to be
sold within the European Union over the next ten years. Although
the Commission says that the sweetcorn...

After months of political wranglings GM sweetcorn could be on the
supermarket shelves by the end of the year with the European
Commission poised to end the five year unofficial ban on
genetically modified foods, writes Lindsey Partos.

Favourable news for the pro-GM camp as a team of British scientists
claims that genetically modified (GM) maize is less damaging to
wildlife than conventional varieties. At the same time, leading UK
organisations call on Tony Blair...

Not so sweet for Tate and Lyle

Major British sugar and sweetener group Tate and Lyle has reported
a sixper cent decrease in half year profits today and the success
of agreementsfor future prices for it starches and sweeteners will
have a major impact onthe profits...

South African millers must fortify flour and maize meal with a
blend of vitamins and minerals, including folic acid, following new
legislation introduced this week to improve malnutrition in the
country.

Ten maize meal products have been voluntarily withdrawn from sale
in the UK after tests showed that they contained high levels of
toxins called fumonisins.

UK maize taken off the market

The UK's food safety agency this week reported that two batches of
maize meal have been removed from sale after tests showed that they
contained unusually high levels of fumonisins.

British sugar and sweeteners group Tate & Lyle on Thursday
reported a jump in half-year profits with underlying pre-tax profit
for the six months to 30 September rising to £126 million (€195.5
million) from €99.9m million last...